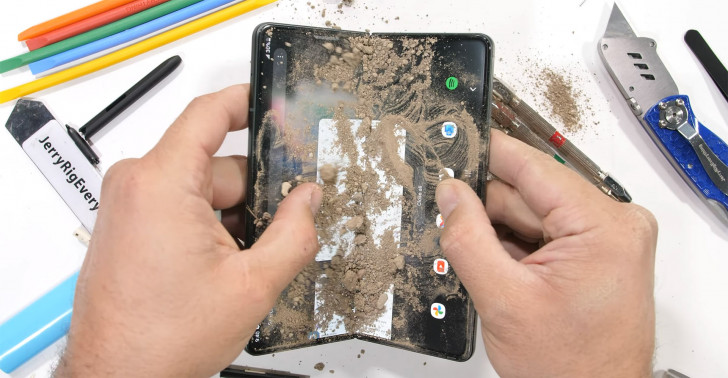 While it’s cheaper than previous generations, the dramatic Galaxy Z Fold3 is still the most expensive phone in Samsung’s lineup, and among the most expensive phones on the market. That being the case, there’s something extremely satisfying about watching someone destroy it with methodical precision. You know what this is leading up to: it’s JerryRigEverything’s YouTube breakdown of the Z Fold3.

There are a few surprises during the nearly 12-minute feature of mild technological sadism. The Galaxy Z Fold3’s exterior glass, on the front screen and rear cameras, is Gorilla Glass Victus, holding up to about a 6 on the Moh hardness scale before scratching. That means it should be able to repel scratches from most pocket change and keys. The interior plastic screen, while considerably tougher than previous generations, still succumbed to scratches at a mere level 2. Samsung’s myriad of warnings on the phone’s startup (like don’t touch the interior screen with a fingernail) seem warranted. The phone’s exterior painted aluminum was easy to scratch and scuff, though the damage was superficial even on the side-mounted fingerprint reader.

The phone itself is much tougher than the Fold2, thanks to water-resistant oleophobic coatings on the interior. Quick splashes shouldn’t harm the phone thanks to an X8 IP rating, but dust is another matter. Indeed, when Jerry pours dust on the interior screen, it seems to leave fine scratches all around. Notably, the folding mechanism doesn’t seem to succumb to the dirt, at least immediately.

The Fold3’s frame is impressively durable, both when folded and unfolded. Jerry was unable to snap the phone back on its hinge, as was the case with the original Fold but not the Fold2. And it stayed shockingly rigid while in its folded position, even though it’s a bit thinner this time around. Perhaps that’s to be expected, since he was essentially trying to crack open two phones at once. Too bad you can’t say the same for the new folding stylus, which was torn apart with casual ease.

All in all, the Galaxy Z Fold3 is a surprise in terms of its ability to take a beating (or a burning), at least for a device with a lot of moving parts and a huge plastic screen as its main feature. If you do manage to damage it, good luck with a repair. All that complex technology isn’t easy to fix, according to a similar video from PBKReviews.

Happy 8th anniversary to this guy who makes my l